And Darkness Fell Upon the Galaxy…

EPISODE: III.LXXV – Nearly sixteen years after the implementation of Order 66 (three years before the Battle of Yavin) the Galaxy is now under the harsh control of the Galactic Empire. Though prevalent throughout most of the galaxy imperial influence is hardly omnipotent. Under the watchful eyes of the Emperor corrupted forces vie for positions of power as the lurking rebel alliance gains momentum. The memory of the Jedi is barely a whisper as Darth Vader continues to scour the galaxy silencing those with even the slightest potential. With all of these competing forces choosing the correct path is not always clear. Do you choose the journey of light, wisdom, and compassion? Or does your destiny steer towards a darker course? 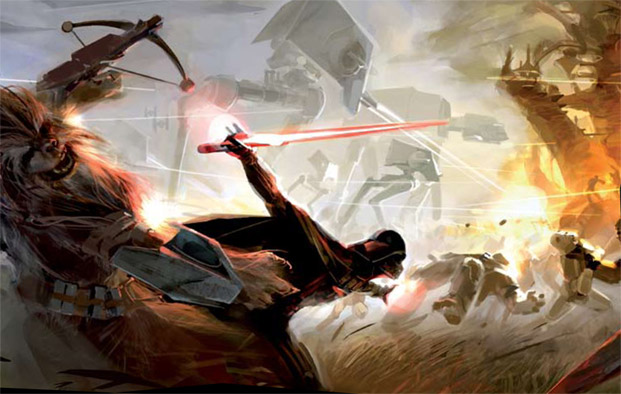 I get ya on that. The Star Wars universe is usually portrayed as black and white but we all know there are many shades of grey that can be expanded upon. By making the Empire, a seemingly unstoppoble force, a true police state that has its spies everywhere. You will eventually drive any party, good or bad, to want to fight or maybe join the Empire. By puting political scenes in the background you can use much of the 20th century as a model for the why of the Rebel Alliance’s hatred and desire to fight. I love the dark overtones and shades of good and evil that you have created. And thanks for fanning my Star Trek page

Thanks Stephen for checking into my campaign! I really appreciate your comments. When I watch the Star Wars movies I have always wondered why members of the alliance hate the Empire so much. It’s not really explained in great detail in the movies. Also, in terms of the available expanded universe literature that is out there, I think there is still much fertile, untrodden soil to plow when it comes to Imperial atrocities towards its unwillful citizens. I thought apartheid would be a great subject of focus in my games. So I have tried really hard to make this hatred for imperials really palpable for my players. Eventually they will have to make a choice…join the rebellion, or continue a scoundrel’s life on the fringe. Either way its going to be fun!

A very good campaign setting and awesome adventure logs. I look forward to following this one and borrowing from it for my Campaign

One can never get enough of good storylines. Keep up the awesome work.

I can completely relate MandalorianGrey, the summer time here too is the worst time for gaming what with vacations, outdoor things to do and what not. Where as winter is prime gaming season! I can also relate to the appeal of a Coruscant adventure, there’s enough material on Coruscant out there to base an entire campaign around the single planet.

Thanks Dyluth! And just for the record, yes, Han Solo did shoot first. I haven’t been doing much on OP lately because I just got back from a long honeymoon in California! My wife and I rode the public transit system almost the entire time we were there, and I have to say it started my wheels turning for some new SWRPG Coruscant adventures (Not that I am lacking any material, but the inspiration was there anyway). Hopefully as it gets a little colder here in the east all of my guy and gal players will be ready to settle into some indoor RPG entertainment again.

My friend you certainly have achieved the “Original Trilogy” feel to your story with all the shooting first and deals in seedy cantina’s we remember and love! Heck, it sounds like you’ve included actual cantina drinks into the gaming experience too, so props for that! I can’t wait to see how your lone Jedi and the party itself fair in the chaotic times leading up to the Battle of Yavin.

Duskreign, thanks for the awesome compliment on our campaigns “StarWarsiness!” That means alot.

I am quite intrigued. I read the first few adventure logs, and they are both very well written and exceptionally “Starwarsy”, which are two particular traits you should be quite proud of. I think you have a great game going, and I hope to see more from you in the near future. I plan to read up on all your adventures going forward.

Creating a strong sense of continuity with the original three Star Wars films has been my goal as a gamemaster from the beginning. More than any other element of the RPG, creating a great story has been my primary concern. While there are noticeable influences of the prequel trilogy, aspects of that component in our game-world are primarily superficial and carefully chosen (i.e. droideka droids are cool, but you will be hard pressed to find any Gungans). While it is true that other aspects of universally accepted Star Wars canon will inevitably sneak into our story, IV, V, and VI ultimately trump all other subsequent variations and forms.

Regardless of our devotion to the original trilogy, individually each of us has always possessed our own versions of how the story unfolds. Collectively however, we agree that our story of the Star Wars universe should follow a darker, less cartoonish, course. Therefore, it was inevitable that facets of other sci-fi films should help form the game-world environment. I cannot see the city-planet of Coruscant in my mind, without first imagining Corbin Dallas racing through the New York smog in his flying taxi cab (The Fifth Element); or imagine the spice mines of Kessel without adding some flavor of description from the desert planet of Arakiks (Dune); or the glass-enclosed, sterile environments of orbiting starports, without first thinking of the Mars colonies found in Total Recall. The dark moods, political intrigues, quirkiness, run-down technology, and creepiness found within these monumental sci-fi films go hand and hand with our in-world vision.

Despite the fact that our game begins approximately three years before the Battle of Yavin I decided to allow one of my players to play a Jedi character. By this time Darth Vader and his Jedi-hunters have effectively killed most of the known Jedi throughout the galaxy. I let him do this with one major caveat: that he be prepared for major conflicts should he reveal his force-using powers to others (NPCs). Frankly, I was afraid that I would have trouble with player retention if I did not let my players play the characters that they wanted. Besides, it makes for some interesting game-play since Jedi’s during this period of imperial terror are automatic fugitives from the law.

As a gamemaster my style is primarily role-playing based. While we do try to “stick to the rules” and use the game mechanics, having a good time with friends, while imbibing some “adult beverages” is the primary goal for our evening activities. Fortunately, as of this writing, no one has started a quarrel about the game rules during (or after) a session. We plan on keeping it that way. As mentioned before, story, roleplaying, and creative output are the most important aspects of our game.

With that being said, we are looking for new players, though unfortunately we do not play online. This is strictly a table-based game. If you are in the Lexington, KY, easygoing, can play on Sunday evenings, and willing to play with a group of people over 30, then you might just be the sort we are looking for. Even if you aren’t interested in playing with our group, but like what you see, please send me an e-mail. I’d love to hear from you!

I'm sorry, but we no longer support this web browser. Please upgrade your browser or install Chrome or Firefox to enjoy the full functionality of this site.